© Mark Brazil Wet your beak: Nabe-zuru, or Hooded Cranes, frolic on the ground and in the sky in Arasaki, Kagoshima Prefecture. | MARK BRAZIL

Celebrating a life with cranes 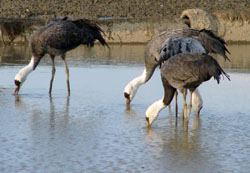 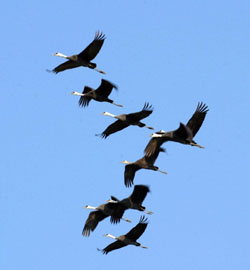 In the dim gray light just before a winter’s dawn, a wash of sound emanates from some 12,000 tall, long-necked and long-legged birds as they awake in the fields of rural Kyushu.

The bugling morning hubbub of massed ranks of cranes about to depart their roost at Arasaki in search of food is one of Japan’s great soundscapes. They stir and call, reuniting their sleeping families. Droves of birds run forward like unruly mobs, then launch themselves into the air and, having gained height, fan out in wavering lines and Vs bound for favored foraging grounds nearby.

But they will be back. The draw of their kind and of the food at Arasaki is irresistible. Yet by the time the rim of the sun itself appears on the pink-flushed horizon, there are hundreds of cranes in the air — though in small family groups and larger flocks, they soon return to the feeding grounds, where sufficient light now illuminates the white necks and charcoal-gray bodies of the Hooded Cranes that dominate this gathering.

However, as the morning sun brushes the flock it reveals, too, the beauty of the White-naped Cranes, a larger and scarcer species that makes up only about 10 percent of the host. But what these cranes lack in numbers, they make up for in elegance. With their deep-red faces, plumage in various shades of gray, and their long, drooping inner-wing feathers shading to white at their tips, these are the elegant birds that draw me back here winter after winter.

It was not always so. In the decade after World War II’s end a mere 300 cranes gathered each winter on the reclaimed coastal land at Arasaki in Kagoshima Prefecture, and in the following decade that number only increased to around 1,000. But even by then such numbers were earning Arasaki a measure of fame as an unprecedented rate of coastal wetlands reclamation in east Asia robbed many wetland birds, including cranes, of vital winter feeding grounds.

As traditional sites were lost, so birds became increasingly concentrated at the few remaining ones, but one thing made Arasaki an irresistible magnet for cranes — the provision of food especially for them during winter. That of course made it a magnet for naturalists too, and it was high on my list of places to visit when I first arrived in Japan.

So, almost exactly 26 years ago, on Feb. 22, 1982, I made my first visit to Arasaki. It was an overwhelming experience, and one that has led me to return repeatedly, exploring the area on foot, tramping the field tracks and paths, exploring the river banks, stream sides and grassy banks in search of bird life that was then so new and exciting for me.

By then, the wintering population had risen to around 4,000 Hooded Cranes, 1,000 White-naped Cranes and a surprising four Common Cranes (scarce in Japan) — and a great rarity in the form of a single, diminutive Demoiselle Crane. I was in seventh heaven, with birds everywhere I walked; I flushed Japanese Quail from overgrown grassy banks; bumped into flocks of Japanese Waxwings and mixed flocks of grosbeaks in riverside trees; searched out buntings by the dozen and found pipits, larks and snipe around all of the fallow fields. At night, weary from tramping all day, I retired for a homely meal to the cozy camaraderie of the Minshuku Tsurumi-tei lodging house prior to dozing off to the soft sounds of the cranes calling as they roosted in the safety of the wet fields beyond.

I was out bright and early on the morning of Feb. 24, searching for more buntings beyond the crane fields, when I noticed the strange antics of several crows down in a patch of reeds. When a Black-eared Kite flew down to join the crows I was prompted to investigate further, and soon noticed something thrashing around in the reeds. As a crow shuffled to peck at it, I realized it was a crane — and that it had been horribly injured.

Scaring the crows and kite away, I determined I had to fetch help, and ran 2 km to the lodging house to alert my kindly farmer host there, Sueharu Matano. The running was the easy part. At that stage, so new in Japan, I barely knew enough Japanese to order a beer. But I did know how to say “nabe-zuru” (Hooded Crane), as my knowledge of bird names far exceeded the rest of my Japanese vocabulary), Matano was a dedicated crane conservationist who I knew would help, and after a lot of miming on my part and puzzled expressions on his, the penny dropped and he ran for his tiny pick-up truck and we were off on a rescue mission.

There is something about a shared emergency to make one appreciate a friend and their qualities, and I recall the calmness and care with which Matano scanned the reeds where I pointed. At first the crane was not in sight and I feared the crows had done their dastardly worst. Then it feebly raised its head and thrashed a wing, and instantly Matano knew exactly what I had tried to indicate when miming a phone call, a line and crazy cutting actions across my legs. The bird’s unnaturally low position gave away the fact that it had lost its legs, no doubt having mistimed its flight, amputating them on the telephone wires strung along the nearby roadside.

Together we approached the bird and trapped it, and Matano entrusted it into my care as we drove back to his farm. As I sat cradling that bird, I wished I could have talked more with Matano and learned more of how his passion for cranes had begun, and how he had directed his energy toward the conservation of Arasaki’s flocks.

Over the years I have returned again and again to Tsurumi-tei and benefited from Matano’s knowledge of the surrounding farmland, rivers and hills in my search for birds. So it was with great sadness, on my arrival at Arasaki on Jan. 22, that I learned he had died of cancer just five days earlier, aged 85.

Matano had become an observer of cranes the year before I was born, and he fed them every day of every winter for more than half a century. By 1997, their numbers at Arasaki exceeded 10,000, and now crane-watching visitors from Japan and around the world must number in the tens of thousands or even hundreds of thousands. Without Matano’s hard work to protect those birds, Arasaki and nearby Izumi would not be the world-famous wintering grounds of cranes they are today. An era has passed, and he is sorely missed.