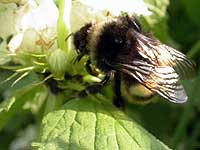 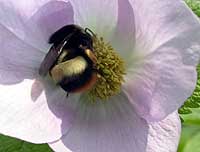 Earlier this year, I watched a number of bumblebees droning back and forth over the ground cover in mountain forest near my home in Hokkaido. They were seemingly oblivious to me. Occasionally one would land, and disappear beneath the leaf litter, or go down a mouse hole or into a crevice, only to emerge a short time later and zoom off again in search of another dark corner.

These were almost certainly queens that had survived overwintering by hibernating, and were then searching out a suitable shady spot in which to start a new colony.

Once a queen finds a suitable site she builds a waxen pot and fills it with nectar to drink while confined. She also stores pollen, forming it into a ball on which she lays her eggs. Then, somewhat birdlike, she incubates these until they hatch. Once the first eggs have hatched and reached the larval stage, she lays another batch.

In some species, there may be as few as 30 bees in a complete colony, while in some, such as Bombus terrestris, there may be as many as 400. Once the first workers have emerged and begun foraging, the queen can concentrate more on egg-laying. The workers only live for about four weeks, so it is common to find moribund and dead individuals falling prey to the ant hordes scouring the forest floor for food.

At first the queen produces workers, but later, by laying unfertilized eggs, she can produce males — but that step presages the breakdown of the cooperative colony.

Males serve only one purpose: mating with new queens. Otherwise, they are parasites on their own natal colony, feeding on the honey stores without replenishing them and then leaving to draw queens to them with their pheromones.

Newly matured queens are drawn to these males, mate with them, then forage to build up the fat stores that will see them through hibernation — and to the recomencement of the endless cycle.

Neither “sonicating,” “petiole” or “corbicula” are words that commonly trip from the tongue, but all are relevant when watching the antics of bees. In my last column (July 17), I described watching bumblebees sonicating while visiting glaucidium flowers, and mentioned that the petiole, the hymenopteran narrowing of the waist, is hidden by the cloak of dense hairs found on all bumblebees. However, I have yet to observe at first hand the workings of the corbicula (or, “pollen baskets”), though I am going to peer at every bumblebee from now on until I do.

Bumblebees exhibit a fascinating array of adaptations to their particular lifestyle. On their floral visits they are after two things: liquid nectar, which they can lap up by repeatedly dipping their hair-tipped tongues into the flower’s nectaries; and solid pollen, which becomes attached to their electrostatically charged body hairs.

However, the pollen isn’t just hitching a ride on the bee; the insect is deliberately collecting it. Bees have a range of combs and brushes on their hind legs that they use to curry out the pollen from their hirsute body covering. They then rake it together into a mass that they can store in their corbiculas — which are the flat, shiny areas on the outer sides of the hind legs that are surrounded with spiky hairs.

Bumblebees are delicate sippers, and they transport precious nectar in their honey-stomach back to their nest. Even a large bumblebee can only carry 0.2 ml at a time, and smaller species carry far less. Yet to fill that stomach, they may need to visit more than 100 flowers, quite a few of which may not provide nectar. Given that a bee may then have to fly 4-5 km back to her nest, we are talking about a seriously precious food resource.

To put into perspective the honey you spread on your toast, for a bumblebee to fill a 5 ml teaspoon with honey she may have to visit as many as 80,000 flowers and fly up to 500 km.

And visiting flowers isn’t always straightforward. Flowers present very different shapes and colors to insects, and that means it can take time for a bumblebee just to learn how to access nectar in different blooms. Not surprisingly, they then tend to specialize, feeding mainly from one or two species at a time as flowering seasons come and go.

It is this loyalty to particular species that makes bees so helpful as natural crop pollinators — a loyalty that is exploited commercially.

However, all is not simple in the world of bumblebees. Beginning in 1991, despite warnings from ecologists, the European Bombus terrestris was introduced to Japan to pollinate tomato plants. Inevitably, escapes occurred from greenhouses, and in 1996 the first wild nest was found in Hokkaido. The naturalization process had begun. In competition for food and nest sites, Bombus terrestris is aggressive, and so it may have a strong ecological impact on the native species here.

Additionally, as bee species and flower species have co-evolved over such long periods of time, bee mouthparts and flower parts now match, so making both feeding and the transfer of pollen efficient. I have heard it said of the introduced bee that it has longer mouthparts, and that these allow it to rob flowers of their nectar without providing pollination services. Clearly, this will become an issue of particular significance to bumblebee-dependent alpine plants if the introduced bumblebee continues to spread.

Unfortunately, too, the introduced bee can hybridize with the native Bombus hypocrita, producing fertile offspring that are morphologically similar to the native species. This makes the use of genetic markers the only means we presently have of recognizing them. Here is an impact that cannot be predicted, nor observed by normal means.

Introductions of alien species are fraught with dangers, many of them invisible to our weak eyes. The adage “big fleas have small fleas upon their backs to bite them, and small fleas have lesser fleas and so ad infinitum” is a reminder that usually with one species come parasites on several scales, and introduced bumblebees are known to carry a parasitic protozoan and endoparasitic mites that may eventually be transferred to local bees.

Thankfully, some companies here are now trying to use the native species commercially — but why didn’t they do that in the first place and avoid the problem?!