A Jabiru stork in the Pantanal of Brazil (above) sits atop its giant stick nest, which has a colony of green Monk parakeets living in the basement. | MARK BRAZIL PHOTO

Building a case for birds 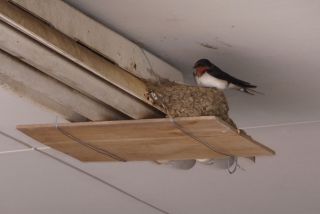 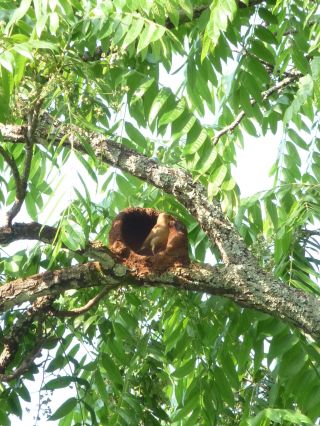 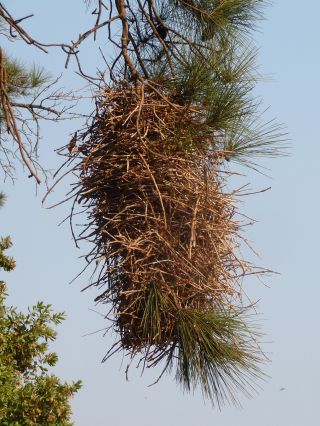 Many people would consider Stonehenge in southwest England or the Great Pyramid of Giza in Egypt — which both date from around 4,600 years ago — among the crowning glories of human achievement.

In Japan, Kyoto’s 14th-century Rokuon-ji (Temple of the Golden Pavilion) or contemporary architect Tadao Ando’s buildings on Naoshima Island in the Seto Inland Sea would surely be on any list of the country’s outstanding structures.

Similarly, whether your buttons are pressed by Brazilian architect Oscar Niemeyer’s futuristic curves or by Catalan Antoni Gaudí’s impact in Barcelona — including his extraordinary Basílica de la Sagrada Família — you would probably conclude that we humans have shown a great capacity to develop from our stone-age past to become creators of living spaces on an inspiring range of scales.

But why are no other mammals such accomplished architects — even though we and the great apes have more than 95 percent of our DNA in common?

I can only think of a few groups of mammals — including armadillos, moles and rabbits — that have distinguished themselves as competent tunnelers and burrowers, but that hardly compares with Stonehenge or Rokuon-ji.

Certainly, innumerable rodents gather dried vegetation and produce balls or mounds of material into which they burrow — the Dusky-footed Woodrat of California may be the most accomplished non-human mammalian architect capable of building relatively complex structures, with both tunnels and chambers, from sticks and other debris. However, another rodent, the beaver, might rival them with their dams and lodges fashioned from twigs, branches, logs and mud.

Yet even those achievements don’t really compare with humans’ handiworks. If we really wish to find accomplished architects in the natural world, we need to look first at the insects.

Consider the extraordinarily precise hexagonal cells of a beehive; think of the strange globular paper structures made by wasps; marvel at the cathedrals of clay constructed by termites; or look to the machinations of the ants.

Some ant species build multilayered and multichambered structures below ground, while others sew living leaves together in the treetops. Some design temporary bivouac camps, some even form living bridges across floods and streams. All that is surely astonishing architecture — achieved, in every case, by social insects, where anything from hundreds to hundreds of thousands of individuals are involved in what is a truly collective process of construction.

Gaius Plinius Secundus, otherwise known as Pliny the Elder (A.D. 23-79), was among other things a naturalist who compiled and wrote the encyclopedic work “Naturalis Historia.”

That Roman author and natural philosopher, who was also a naval and army commander, perceived that early human architects who built houses of clay took their inspiration from the natural world — in particular, from swallows. Indeed, it is not so difficult to imagine some human proto-architect thinking that if a bird can build from wet mud, so could s/he.

That humans can achieve architectural feats on dizzying scales should come as no surprise, since we have enormous brains and are manually dexterous. We can, too, call on a wealth of materials with a wide range of properties, and can utilize a vast array of tools — from needle-fine drills to mighty tower cranes.

That no other mammals come close to us, architecturally, creates something of a conundrum — but that birds can trump the social insects in their array of architectural marvels is nothing short of amazing, especially considering they have little time and absolutely no training.

Birds must build their nests in a matter of a few days before egg-laying, relying entirely on their instincts, though the final structure is only used for a few weeks before being abandoned, in most cases forever.

In a sense, birds are stuck in one groove architecturally — over and over, each year, they construct nests and nothing else. But for those nests they must gather all the materials themselves and then build and shape the structure using only their bill, their breast and their feet.

For all that, their range of structures is phenomenal.

Shorebirds, for example, live extremely terrestrial lives and make simple scrapes into which they lay their eggs, while woodpeckers, bee-eaters, hornbills and nuthatches excavate holes into trees or tunnels into riverbanks or the ground. Among the largest birds, the flightless Ostrich and the cranes build mound nests on the ground; others, such as the enormous Jabiru storks of South America, contrive massive treetop structures. These storks’ nests are so attractive that they frequently attract colonies of Monk parakeets — noisy neighbors who move in and build basement apartments.

Like the storks, some species of which will nest on towers or churches, eagles also build massive structures high off the ground, and may use their aeries for decades until a storm blows them down or a supporting tree collapses under the nest’s weight.

Meanwhile, there are birds that like waterfront properties, among them the grebes, jacanas, rails and marsh terns which all build floating platforms to lay their eggs upon and raise their young.

However, the classical avian architecture consists of a cup, made from a variety of materials ranging from spider silk, mosses, fine threads and fibers to coarser materials (some even comprise a bird’s dried saliva!), all woven into an open cup attached to a branch, a cliff or a man-made structure.

The caciques, oropendolas and orioles suspend their woven cups in what look like string bags, while the tailorbirds stitch their nests together from leaves. Open cups may morph into domed nests in the case of certain Eurasian warblers, such as the Chiffchaff and Wood Warbler, and whereas most males construct a single nest to entice their mate, the Winter Wren may build as many as 12 before he can please a partner with his design or its location.

Meanwhile, building from mud is by no means confined to swallows, and indeed flamingos and albatrosses share a design feature — their nests are mounds of mud with a cup in the top.

For some, though, mud is not hard enough: The Adelie Penguin, the Giant Coot and the Black Wheatear all gather stones to form rock-pile nests. For others, notably the Mallee fowl, the task of incubating their eggs is too onerous so they rely on the natural heat provided by rotting vegetation, which they pile up into a great compost heap over their eggs.

Clay is a wonderful material, but as any potter knows it must be of just the right consistency, with just the right amount of water, to be malleable enough to make things from it.

Barn swallows breed widely throughout the warmer regions of Japan, and their mud-cup nests are commonly seen in urban and rural areas alike, often in open garages or outbuildings. When food is plentiful, swallows may breed several times in a summer, and even now may be raising a second or third brood of chicks in your neighborhood.

The ultimate masters of mud-nest construction, though, are the Horneros of South America, whose almost spherical constructions resembling old wood-fired ovens have a curved entrance and a baffle inside to deter predatory intruders.

Recently, as I watched a flock of Asian house martins in the Tateshina area of Nagano Prefecture swooping down to alight beside a puddle and collect globules of wet mud to carry back to their nests taking shape under the eaves of a nearby hotel, I was reminded of an old kikinashi (bird-sound) rhyme about their relatives, the swallows, collected in Hida by Kawaguchi Magojiro (1873-1937):