Slugs and snails set to feast on the dead. | PHOTO (C) IMAGES OF JAPAN

Bliss for a Lazy Birder 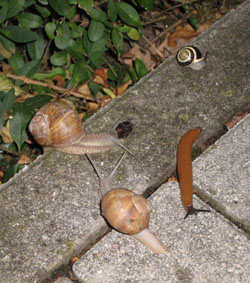 Birders are often motivated by their species list — often something akin to their meaning of life.

I’m a Lazy Birder — I knew I’d become one a few years ago, when I realized that my “bath list” was the most important to me. But while watching birds from a hot-spring spa has its obvious attractions (the hedonistic hot soak not least), I’m beginning to wonder if I haven’t now set out on an even lazier course.

Recently, at the very end of July, I was lying in my tent in the beautifully wooded Shirogane campsite in central Hokkaido, reveling in inaction (the previous day I’d hiked 12 hours straight). It was 2:30 a.m., and over the reassuring white noise of the nearby river, from the darkness above my camp came the mournful, double-noted whistle of Japan’s largest thrush — a tora-tsugumi (white thrush). Next I pondered over a kind of coughing “wau,” before eventually putting it down as the call of a collared Scops owl.

Then I dozed, and woke later to the dawn sounds of a narcissus flycatcher, the buzzing of a pygmy woodpecker, then a nuthatch, a thick-billed crow and the crazy, moaning sound of an ao-bato (Japanese green pigeon). My own nickname for this bird is “aho-bato.” If you have heard the call, you will understand why.

Next, a great spotted woodpecker called and tapped on the tree above my tent, then a black woodpecker’s strongly whistled call shifted gears to its rattling flight call as it crossed the campsite between the trees. I heard Oriental greenfinches, great tits, then hawfinches and a gray thrush. Meanwhile, a thin, sibilant, high-pitched sound was a goldcrest somewhere above me in a conifer.

It was still before 6:30 a.m., and I had yet to leave the warmth of my sleeping bag. I lay there thinking that July and August are usually the dullest summer months for birding, as breeding has mostly finished and migration barely begun. If I wanted to go out and find birds, I thought, I’d be hard pushed to find more than I’d already heard without making any effort.

Somehow, though, that laid-back start to the day left me sensitized to other sounds, and when I finally emerged to a beautiful sunlit view of the Tokachi-dake and Biei-dake mountains, it was the smaller things nearby that I noticed most keenly.

The season of the dragonfly is upon us. I could hardly miss the dry-leaf rustle of their wings. One shrub I observed had 24 dragonflies perching on it; others were equally laden, as if squadrons of them had all been ordered to land at once.

Despite the many roosting individuals, the air between and above the trees was filled with more of them. They swooped and turned, moving in great groups, reminding me in their seemingly organized motion of shoals of fish turning and twisting in a mysteriously coordinated way in clear water.

I counted them by the hundred as they hung in the air, their ranks so multitudinous and so widespread that I felt a momentary concern for their prey (until, that is, I thought that mosquitoes might be included — and I am no great fan of mosquitoes).

So, a day that began quite audibly with birds was shifting from the melodious to the rhythmic; from the tuneful to the noisy. The dragons were on the move, and as the air warmed up more, the steady, sawing drone of cicadas and the rasping of crickets became evermore noticeable, too.

An hour or so later, I was strolling along an old forestry road beside the Horoko-Ashibetsu River, near the Sandan Waterfall. Vegetation was encroaching aggressively from both sides, and here and there the track was puddled with water — signs of recent rains, but not enough to have swollen the river yet, so its sound was a quiet “susurrus.”

The desultory, damp warmth was ideal for insects. As I approached each puddle, butterflies rose; a swarm of nearly 20 from one, singles sipping moisture from others, while pond-skaters broke rippled patterns across the larger pools. In just over an hour I spotted more than a dozen species of butterflies, from blues and whites to skippers and swallowtails — and they were not alone in their profusion.

There were myriad fly species, some glistening and green, others metallic blue; wasps and occasional hornets buzzed past (and were less welcome); and my only moment of alarm came when a huge osuzume-bachi (Asian giant hornet; Vespa mandarinia) took too close an interest in me. Having heard that more people die each year from hornet stings than from bear attacks didn’t endear me to it, and I have to admit to temporarily stunning it with my cap. Neither of us benefited from the encounter and we parted on unfriendly terms and in opposite directions.

The early morning bird song was only a memory now, drowned out by the full force of the invertebrate chorus. I found a male Miyama stag beetle (Lucanus maculifemoratus) out strolling the same path, undeterred by my monstrously large looming presence, and minutes later I blundered on a single female long-horned beetle (Pachygrontha antennata). Each insect provided a small window into a whole web of life-cycles within the forest of which I feel woefully ignorant.

Circling to their doom

After nightfall, the shifts change, of course — and I’d seen evidence of that around the few lights at the campsite, where swarms of dazzled moths were circling to their doom. More evidence was on the forest track before me: Droppings from a nocturnal mustellid, probably a weasel or a marten, now attracted foraging flies, but in a few hours’ time those same droppings would probably lure out those nocturnal detritus feeders, slugs and snails. These slow-moving members of the graveyard shift are known as detritivores, and are among the invertebrates to which we humans should be most grateful.

I count pollinators as one of our greatest blessings, without which we would have a pitifully reduced food supply and a great deal fewer flora. But can you begin to imagine what life would be like without detritivores?

Everything natural that falls, or is dropped — whether vegetable, from flowers and fruit to leaves and twigs, or animal, from shed skin, fur and feces to whole carcasses — somehow disappears, thanks largely to that nocturnal army of nature’s recyclers.

One night about a month ago, I stumbled on a regular slime-fest of activity, a great molluscan gathering of snails and slugs beneath a single fruiting tree. What amazed me was the speed with which they’d flocked to their harvest of dead matter. The following morning only a silvery web of drying sticky trails indicated where they had been. These creatures do our dirty work, and seem to consider nothing too foul to be food, from overripe fruit to fungi, from dog droppings to dead dogs. In fact, they are not even put off by cannibalism, but it is thanks to their lifestyle and diet that we don’t have to deal with a steadily and endlessly burgeoning accumulation of festering biological waste materials around us.

If the thought of bugs, of slugs, snails, beetles, crickets, spiders and even flies doesn’t excite you, then you must have missed a fabulous book titled “The Smaller Majority,” published to wide critical acclaim in 2005. It is beautifully written, and replete with stunning photographs taken by the author, Piotr Nascrecki, of the Museum of Comparative Zoology at Harvard University.

I had the good fortune to work with Dr. Nascrecki earlier this year, and his writing conveys well the personal passion he has for opening our eyes to the titular smaller majority, the more than 90 percent of creatures on Earth that are smaller than a human finger. If you haven’t already read it, I recommend it most highly.