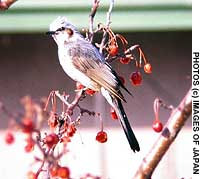 As seed dispersers they're tops

Second of two parts Imagine, if you can, an opinion poll of Japanese forest plants. Question: which bird is most important to you? The brown-eared bulbul, or hiyodori, would have to take a bow.

On sighting this bird, naturalists may disparagingly remark, “Oh, just another bulbul,” while late-rising suburbanites may complain about being woken by the early morning ‘shreeping” and “weesping” of seemingly frantic bulbuls in their gardens and parks. The frenetic bulbul is, nonetheless, a giant in terms of its role in Japan’s forests.

What makes it so special?

We can call the hiyodori various disparaging names: “generalist” for one, “greedy gulper” for another — even “big mouth.” After all, it feeds on the fruits of more than 50 plants, and is not delicate about gobbling them down.

However, what puts the indelicate bulbul so high in the forest plant opinion poll is that it is common throughout the fruiting season (from April until December), and has a wide enough gape to be able to swallow most fruit sizes and types whole. As a result, it does more for the many fleshy-fruited plants of Japan’s forests than any other bird in terms of being an efficient agent of seed-dispersal.

Close behind the drab but vociferous bulbul in the ranks of diligent avians comes another ubiquitous Japanese bird, the colorful white-eye, or mejiro. These two species make up more than 80 percent of the frugivorous bird population during the summer in Honshu — and they become even more common in autumn as more arrive from further north. During October, bulbul and white-eye numbers are further supplemented by the arrival of large flocks of migratory wintering thrushes, bringing frugivorous bird numbers to their annual autumnal peak.

Then, during December, frugivore numbers decline and remain relatively low throughout winter, before rising again from mid-April as more southerly wintering birds pass through on their way north.

The timing of fruit production by plants is not a random event. Although there is a long period from late spring onward when some fruits are available, more than 60 percent of the fleshy-fruited plants in temperate deciduous forests in Honshu ripen in autumn. This means that the greatest diversity of fruits becomes available when frugivore species and numbers are greatest — what a coincidence!

Links between bird movements and plant phenology have been well studied in Europe and the Americas, and more recently in Japan, too. Such studies have shown that the peak fruiting periods of many fleshy-fruited plants moves along a latitudinal gradient from north to south, coinciding with the maximum abundance of frugivorous birds.

This perfect timing has its roots in an evolutionary battle of wits. Fleshy-fruited plants producing fruit in autumn are engaged in keen competition to attract seed-dispersing birds such as bulbuls and white-eyes. One way of winning is to produce larger quantities of more attractive fruit; another way is to fruit at times when other plants do not.

Some plants stand out as vital, or key species, because their fruit is produced in large amounts at times when few other fruits are available. Giant dogwood (Cornus controversa) is one such species, with its fruit appearing in early autumn before the competition really heats up. It is rewarded by being eaten by at least six common frugivores.

However, plants not only compete with each other in the forest, they’re also at it in the gut as well, this time battling the bird’s digestive processes.

On the one hand, birds want as much energy as they can get for as little effort as possible — effort that includes carrying around a gut full of seeds. Birds want to get rid of seed waste ASAP. Plants on the other hand benefit from having their seeds carried as far as possible from the parent tree or shrub. Ideally, their seeds will hang around in the carrier’s gut for as long as possible.

Endozoochorous plants (those that depend on frugivorous birds to disperse their seeds) have evolved special features to make their fruit attractive — bright colors, size, abundance, position on the plant, seed number, and so on. Fundamental to endozoochory is that the plant’s seeds must pass intact through a bird’s gut to be dispersed.

What’s more, it is beneficial if seeds remain in the gut for a while. The avian gut provides a value-added service, not just carriage — abrasion of the seed coat in the gut enhances germination rates. The flip side, though, is that if the seeds stay too long in the gut they will eventually be digested. And a bird with a gut full of seeds can feed only at a slower rate. So the length of time that seeds take to travel through the gut is significant, both for plants and for birds.

In these “gut wars,” tricks are used on both sides. Some birds are picky, some are mashers that chomp fruit and extract the portions they want, dropping the rest and so bypassing the plant’s seed-dispersal needs. Gulpers, on the other hand (and the bulbul is Japan’s most common gulper), ingest fruits whole, then eliminate the seeds up to one or two hours later — so doing the plants a big favor. Small seeds have the advantage that they take longer to pass through the gut and so are carried further, to more diverse destinations.

In contrast, bulbuls process fruits with large seeds quickly. The large seeds pass through the gut faster, and so are not carried so far, but plants producing large fruits may be more attractive, so more of their seeds are carried.

Imagine the kind of life these forest plants live: Their fundamental challenge is to see how long they can have their seeds carried around in a bulbul’s gut! But it’s great news for the hectic bulbul.