A modern replica (above right) used in a CD recording. 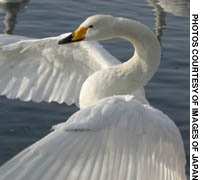 All winter long, the cacophony of sound at Sunayu, on the eastern shore of Lake Kussharo in eastern Hokkaido, is almost entirely comprised if the bugling and whooping of swans.

There, Whooper Swans crowd into the narrow ice-free strip along the lake edge where geothermal activity warms the sand and where visitors gather to greet and feed these winter immigrants from Russia. The noise can sometimes be so deafening that I have heard it frequently from one of my favorite birding localities — the outdoor hot spring of a local lodge that is nearly a kilometer away in the woods.

It’s a haunting sound, rising to a crescendo as pairs meet and greet, as families displace each other and as birds arrive and depart the flock.

With their immense white wings spread, their necks thrust up and forward, their beaks open wide and their tongues clearly visible, they display and call.

It’s a sound that I never tire of hearing, and one that has been with me through 25 years of research into their ecology and behavior in various parts of the world.

Today, however, I am writing this while listening to another swan sound; one produced not during life, but after their death. And it is the first time I have ever heard it.

The sounds made the backdrop to a fascinating exhibition. I was immensely fortunate to be able to visit the Wurttemberg State Museum, in Stuttgart, Germany, on March 6 this year — the very last day of an extended run of an exhibition of the world’s oldest flute — made from a swan’s wing bone.

As you may imagine, I stood in awe in front of this astonishing link between early man, early music, and my favorite birds. But more incredible than just seeing the flute was hearing the haunting sound it produces; an achingly beautiful and echoing tone — part flute, part whistle — that was heard and enjoyed around 35,000 years ago.

The music, “Klangwelten der Altsteinzeit (Sound World of the Old Stone Age),” is a CD compilation played on the simple but sublime instruments discovered in the Geissenklosterle Cave in southern Germany along with the oldest known human artworks, including an exquisite carved-ivory cave lion. The music combines sounds including the dripping of water, those created with a whirling stick, and some made by a replica of the pieced-together flute.

Other early flute finds include 5,000-year-old instruments from Egypt, with murals depicting them being played. There are also fragments of flutes from southern France made from the bones of the Bearded Vulture. From China came flutes fashioned from the wing bones of cranes, instruments that were found during excavations in Jiahu in Henan province, that date back 8,000 or 9,000 years.

However, as the swan’s wing-bone flute from the rich deposits of Germany’s Geissenklosterlen Cave is known to be between 32,000-36,800 years old, it makes the ancient flutes of China seem positively modern.

That tiny flute, displayed in the museum in Stuttgart’s Old Castle, was on show in a vertical position in a modest clear case, with only the briefest of descriptive labels. It is not even a hand’s span in length (at just 126.5 mm long), and not surprisingly it did not survive the millennia intact. Yet this small, unpretentious artifact with three finger holes, which was pieced together from 20 fragments from one wing bone of a Whooper Swan, raises so many questions. How did its makers hunt swans? How long had they followed a tradition of making musical instruments? Were they modern humans, or were they Neanderthals? Why does it produce seven notes? And what was those people’s music like?

Perhaps the echoing, dripping atmosphere of the cave where it was discovered was not merely that of the instrument’s last resting place, but also part of the musical tradition of the period. I imagine the cave as being mysteriously shadowy, wherein the deep thrumming of whirling sticks and the high-pitched melodies of swan-bone flutes, and perhaps the rhythmic drumming of bone and stone, created an atmosphere that emulated the magic of the natural world.

Bird bones lend themselves particularly well for use as wind instruments, because of both their strength and their essentially hollow structure. The swan-bone flute, reconstructed using additional new bones and contemporary tools such as flint saws and drills by the outstanding, Ulm-based experimental archaeologist Friedrich Seeberger, produces seven fine, modulated tones (four base; three upper), forming part of a pentatonic scale.

Bird bones were particularly effective as musical instruments, since they generate expressive melodies, but they were not the only suitable material, as archaeologists have shown with their finds of a similarly aged flute made from mammoth ivory and pieced together from 31 fragments.

Although the physical remains of the instruments exist, and the notes they produce are clear, we can only imagine what kind of music was performed on them — whether, for example, it was for entertainment, or ritual.

I like to think that a people capable of hunting down swans and mammoths would have used such instruments to imitate many of the natural sounds around them. I imagine a dramatic Stone Age soundscape drawn from wind, water, wood and stone, composed from the calls and songs of birds and mammals mixed with natural environmental sounds.

Fortunately in this respect, Seeberger’s expertise extends beyond technical reconstruction to musical reconstruction, and he has developed a mastery of the Stone Age bone flutes, and other prehistoric instruments — hence the CD of the sounds recorded in the Hohle Fels Cave near Schelklingen.

Seeberger’s reconstruction uses a 150-mm-long Mute Swan wing bone, and his approach to the music played on it takes into account the reliance of current aboriginal peoples on shamanic traditions, in which sound is a medium between the world of reality and the world beyond.

Seeberger has relied on this ancient tradition to create a haunting musical framework using ancient instruments. In this soundscape, music is part of a ritual dialogue and a kind of reconciliation between the hunter and the hunted; a dialogue in which animal voices are often mimicked along with rhythm and drone songs to become musical phenomena that are inseparable parts of shamanic traditions involving trance.

Music — either ancient or modern — helps us to transcend our normal human condition, and to send the soul on a spiritual journey.

Having seen the swan-bone flute and heard the magical sounds it produces, I will never look on the Whooper Swan as merely a bird again: Clearly it is an ancient link between worlds.