An island alone that is worlds apart 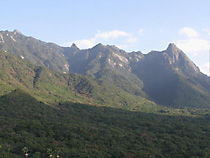 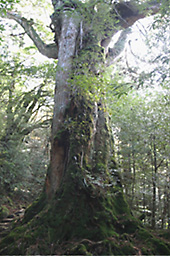 If it were possible to view the Japanese archipelago rising from the Pacific in profile, a distinct, lonely, broad cone would be immediately apparent between the high peaks of the Japanese Alps of Honshu and the even higher peaks of Taiwan. That cone is the long-isolated, mountainous island of Yakushima, which has not merely a distinctive character and climate, but also a unique blend of wildlife.

It was on account of its unique natural history that this small piece of coral-fringed paradise was honored as Japan’s first United Nations-designated World Cultural and Natural Heritage Site. Last month, Yakushima celebrated the 10th anniversary of that designation, in December 2003.

Formed between 14 and 13 million years ago by an upthrust of magma, and now roughly circular, conical Yakushima is a mere 132 km in circumference, yet it is pinnacled with 40 granitic peaks rising to over 1,000 meters. The highest of these, Mount Miyanoura reaches 1,935 meters, though Kurio (1,860 meters), Okina (1,850 meters) and Kuromi (1,836 meters) are not far behind, making Yakushima a miniature, oceanic, forest-clad Alps — a wonderful wandering ground for the avid hiker.

This “mountain island” (as its Japanese name translates) generates its own climate — and it is a wet one. Warm Yakushima, renowned for having “35 wet days a month,” as a Japanese saying goes, enjoys an incredible rainfall, which makes for superb waterfalls and rivers amid the misty, moss-clad peaks.

Within a very short distance there are staggering climatic changes. Whereas the coastal climate is subtropical, mild (top temperatures around 35 degrees) and frost-free — and relatively dry, with a “mere” 4,000 mm of rain per year — the sub-alpine mountain peaks experience the southernmost regular snows in Japan and yearly precipitation amounting to a staggering 10,000 mm.

Yakushima’s extraordinary plant life is a result of the island’s diverse topography and weather patterns. Unlike anywhere else in Japan, plants at home in the subtropics, and others equally at home in subarctic climates occur within just a few kilometers of each other. Tropical plants such as hibiscus, bougainvillaea, bananas, passion fruit, papayas and banyan trees are found here at their northernmost limit in Japan, growing around the richly varied coastline. Yet not far above them are typical temperate mixed forests, home to conifers and broadleaf trees, which are rich with blossom in spring and colored foliage in autumn. Above 700 meters, the forests consist largely of the island’s world-famous cedars and cypresses which, lofty and long-lived, create a cathedral-like atmosphere.

More than its 3,000 species of animals and 1,300 types of plants, Yakushima’s most memorable feature is those ancient cedars. Even some of the “younger” ones are more than 1,000 years old, while standing among (and long before!) them is the world’s oldest tree, the Jomon Sugi, reputed to be 7,200 years old.

This venerable tree, standing 25.3 meters high, 43 meters in circumference at the base and 16.4 meters around the trunk, even outranks California’s General Sherman Tree, which is a mere 3,000-4,000 years old Sequoiadendron; it outspans the 4,000-year-old Patagonian Cypress; and easily outstrips the “ancient” 4,900-year-old bristlecone pines of the Sierra Nevada.

In ancient times the mountains of Yakushima were thought to be inhabited by gods, and the sugi forests were considered sacred. Then, by the late 16th century, their value as timber was already recognized, especially for the massive Yaku-sugi boles required for the building of temples in the then imperial capital of Kyoto.

Today, the serpentine roots of the ancient cedars embrace a forest floor of rocks and fallen timbers that are thickly moss-covered and slippery. In the ever-present dampness, the loamy smell of the forest is rich and pervades the air, through which the gnarled cedars’ trunks struggle skyward. At higher levels, where dwarf bamboo is abundant, secretive diminutive sika (deer) browse in small herds.

At lower levels, the woods echo to the sounds of Japan’s most vocal monkeys, its macaques. Here, in such dense forest, they must call much more often than elsewhere, to keep in contact with each other. Their other unique feature is their large cheek pouches. They nibble off large quantities of tree fruits, and these they store in their pouches for consumption later. Spitting seeds as they go, it is the monkeys that contribute to the spread of the next generation of trees.

Though the heavy rainfall that regularly drenches Yakushima makes life miserable for the soaked macaques, which huddle in family groups against the rain, the same dousing is ideal for damp-loving plants such as mosses and ferns.

There are 300 species of fern living on this island alone. Typical of Yakushima as a botanical stepping stone, 42 of them are at their northern limit here and 43 species are at their southern limit. At the highest levels of all, the lush, moss-draped conifer forests give way to Yakushima’s astonishing mountaintop alpine zone, where subarctic plants, capable of withstanding buffeting winds and cold, are found. When the rain clouds disperse, the views taking in all the peaks across the island, the forests below and the turquoise ocean below them, are magnificent.

It was for this exceptional natural beauty, its outstanding natural phenomena, and its extraordinary range of flora and fauna, that Yakushima was included in the World Heritage List. It is because of its height, and location, that Yakushima has such a strange transitional ecology, with a large number of tropical plants and butterflies, and other tropical insects and animals living here right at their northernmost limits, while certain temperate and alpine species occur here at their very southern limits. Neither the Japanese macaque, the deer, nor the Japanese green woodpecker, for example, range further south than Yakushima.

It is the coexistence, on one small island, of plants and animals from such widely different climatic zones, that makes Yakushima so special. In profile, from the sea, it is Yakushima’s mountains that stand proud. Up close, though, it is the great and venerable cedar trees and the richness of life at this crossroads in the ocean that make Yakushima so very special. But for the macaques and deer, and the many other animals and plants that live there, Yakushima is not merely special; it is home.