Unwanted guest: A large male green anole in silhouette behind a fan palm leaf on Chichijima, in the Ogasawara Islands. | MARK BR

An audience with an island menace 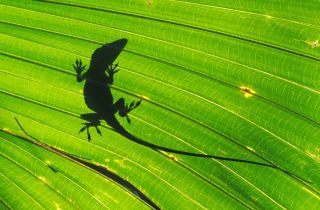 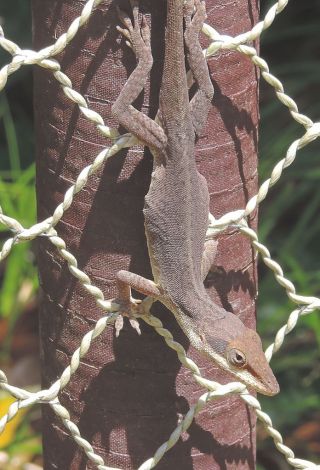 By 8 o’clock on a warm early summer morning on Chichijima, one of Tokyo’s Ogasawara Islands, bright sunshine was already threatening to overwhelm my light-sensitive eyes and the heat was cranking up in preparation for what I refer to as reptilian warmth.

The panoramic view from the Mikazukiyama Observation Platform viewpoint was of dark-green-clad rocky headlands and islets, and a dazzling azure sea stretching to the horizon. Waves formed white riffles as they broke gently on emergent rocks and scattered foam along the beach. In their lazy restlessness the waves created the appearance of a fluttering lace border between land and sea. In the middle distance a boat slowly following surface splashes suggested that a pod of dolphins was playing with another border — that between water and air. Since it was too distant to make out, even with binoculars, I resolved to focus on things closer at hand.

Thoughts of the sea far below suggested coolness, but down there in the dolphin-watchers’ borderline realm there would be no escape from the sun’s glare, so I opted for a shady, tree-shrouded woodland walk. The rough trail wound its way along to the viewpoint overlooking Futami Bay. Soon I was passing through groves of native broadleaf trees and palms and beneath towering casuarina trees transplanted here perhaps from Australasia or Southeast Asia. One of the many miraculous capacities of trees is to ameliorate the ambient temperature, and merely stepping in among the trees was sufficient to make me feel cooler.

The sun, shining down through fanned and ribbed palm leaves here and between heavily leaved tree branches there, cast a delightful dappled green light onto the forest floor. The benevolent scene, picked out in shades of eye-soothing emerald, was a reminder of yet another capacity of our planet’s plant life: the capacity to help us change our moods. From the eye-stressing whitish glare and brain-searing heat beneath open skies to the eye-relieving soft jade luminosity beneath the woodland canopy, the transition was astounding. My impatience and desire to move on were soon replaced with a relaxed desire to linger.

Pausing, I reached for my camera to capture the light and picture the penumbra beneath the fan palms. It was then that I noticed an unexpected silhouette on a palm leaf above me. It was as if a sinister kiri-e (paper-cut picture) creature had been excised from green cloth. The motionless beast was elongated and slender, with a long narrow head and a fine whip-tail extending further than the length of its body. Gazing at the silhouette I was struck by the fineness of its toes, which were not just long and slim, but bulged laterally to become so much wider than at either the base or the tip. Strange toes indeed, but I was to learn that they are crucial to this animal’s arboreal lifestyle.

I first visited Hahajima in the Ogasawara Islands in July 1987 and have neither notes nor memories of seeing lizards there then, though I would have been excited to see the endemic Ogasawara snake-eyed skink. On my most recent visit to Chichijima and Hahajima it seemed that wherever I paused long enough and scanned the branches and leaves of the trees around me thoroughly enough I would find one or more lizards. All of the many lizards I encountered were anoles. None was a skink. In fact, the only skink I encountered (my very first) was in danger of being devoured by a blue rock thrush until I scared it away.

These anole lizards go by various names, some of which indicate their origins — Carolina, green, American and red-throated — though one of the most descriptive is the American chameleon. Native to North America, they range through the south-eastern coastal states from Virginia south to Florida and from Alabama to Texas. Unfortunately, the species has been introduced to the Hawaiian Islands and to the Ogasawara Islands, where they are wreaking havoc among the native fauna.

Though not a true chameleon, the 12-to-20-cm-long green anole changes color in relation to its level of activity, the light conditions and its background. The anoles I found ranged in color from bright emerald green to dull brown, and the larger, brighter males sported red dewlaps that they extended and used for signaling. The green anole is arboreal in nature, and it is those oddly bulging toe pads that make this lifestyle possible. Like those of a gecko, the toe pads have numerous fine-tipped hair-like scales, making them seem adhesive and allowing them to climb easily, not only up trees but even up metal.

Although the WikiHow website describes the green anole as “a delightful small lizard” that “makes a popular choice for an easy-care reptile pet,” on the isolated Ogasawara Islands they are not a delight, but a menace.

These remote islands lacked tree-climbing lizards until the anoles turned up in the 1960s and ’70s. It is thought that they arrived accidentally among American military equipment or were imported deliberately as pets, but then released. It was only in the 1980s that they crossed from Chichijima to Hahajima, further extending their range and their devastation of islands so important biologically that scientists frequently compare them with the Ecuadorian Galapagos Islands, because of the way the local fauna and flora have evolved there into many unique local forms.

Since the anoles’ introduction, numbers have exploded from zero back in the early 1960s to millions (estimates vary between 2 and 6 million!), and those millions of lizards have had a long party at the expense of the native insect life that once thrived there. Female green anoles mature rapidly. Within about eight months of hatching, they are able to breed and can produce up to about 10 eggs a year throughout their life span of four to eight years, giving them a tremendous capacity for increase. They and their offspring are voracious, living off the indigenous life of the islands.

Green anole lizards now scour almost all habitats in the Ogasawara Islands for insects on which to prey. They are directly implicated in the demise of five endemic dragonfly species, a blue Lycaenid butterfly, an endemic cicada and a long-horned beetle; that is a hefty rap sheet, and unsurprisingly the anoles are now high on the wanted list of alien species on the islands (along with goats, cats, rats and a host of invasive plants).

Because of the anole, dragonflies declined dramatically during the 1980s and are now either extinct or nearly so on the two main islands of Chichijima and Hahajima; I saw none on my recent visit. The endemic butterfly has been wiped out everywhere on Chichijima, and survives now only in some areas of Hahajima. A local fisherman on Hahajima reminisced with me about his memory of the noisy chorus of the local cicada; that chorus has been silenced. Anoles have also been found to be predators on the islands’ bees, and as such they are affecting the pollination and fruiting of local plant species, many of which are endemic.

With the Ogasawara Islands inscribed on UNESCO’s World Heritage List in 2011, Japan’s Ministry of the Environment and local islanders have received a boost, and signs are encouraging that control of anole (and other invasive introduced species) may be possible. Intensive trapping with specially designed sticky traps is helping, especially around the ports, and there is hope of both reducing the anole population and preventing its further spread to uninhabited islands. The fate of the indigenous insects of the Ogasawara Islands lies in our hands, and thankfully public awareness is now on their side.