A wildlife odyssey to rank with any 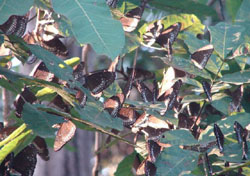 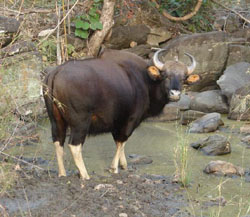 Being both a columnist and an author is to be constantly in the midst of a kind of battle — between short-term bursts of effort and rapid gratification, and long-term strategic planning, exertion, and inevitably delayed gratification.

This battle is fought out over a keyboard, and though at this time of year I am lucky enough to be able to view a montane landscape covered in snow-blanketed forest from my desk, writing about natural history isn’t a patch on being out there, among nature, witnessing and learning about the lives of our fellow Earth inhabitants through direct experience.

Each hour at my desk, I often ruminate, should be balanced by an hour in the field — at least that’s what I tell myself, and what I dream of.

I am immensely fortunate to be busily involved, too, in the nature of ecotourism, not just lecturing and writing about it, but planning and implementing it.

When a chance to make a reconnaissance visit to Madhya Pradesh and Assam, India, came my way over Christmas and New Year, my mental calculator quickly sprang into action — I could see hours among wildlife rolling in front of me like the mesmerizing spinning wheels of a slot machine. During my short-term bursts of effort, I maintain a simple formula for each weekend: I will not go anywhere unless I can spend more time out-of-doors in forest, on mountain or seashore, than I spend getting there. So, if it takes an hour to get somewhere, I aim to spend a minimum of 2 hours “out-there” before returning.

This long-term Indian odyssey was no effort at all, and beat the formula hands down, as I spent almost every daylight hour searching for or watching wildlife.

If thoughts of India and wildlife have not coincided for you before, then think again. Perhaps you have seen those television commercials with the catchphrase “Incredible India!”; you probably realize that India has an immensely rich cultural, ethnic, linguistic and religious diversity; but you may not know that despite its enormous human population, it also has an enviable array of national parks, and superb biodiversity too.

In fact, I’d argue that India rivals East Africa in its wildlife-watching opportunities — I saw no fewer than 28 species of mammals during my recent visit, and I can’t wait to go back.

It is difficult to be noncommittal about India; you either love it or hate it, right from the start.

There is only one way to find out. If nature is your “game,” then India offers some fabulous experiences. Seeing 250 species of birds was exciting enough, but in a sense they were just the backdrop for even more amazing wildlife-viewing, ranging from ubiquitous five-striped squirrels, scuttling and scurrying about even in urban parks and at World Heritage sites such as the Taj Mahal, to sleek Gangetic river dolphins swimming in the mighty Brahmaputra in Assam.

In between those extremes were: elephant-back adventures in search of the Indian one-horned rhinoceros in Kaziranga National Park, where the world’s largest population of any rhino exists; and again on elephant-back in Bandhavgarh NP, catching glimpses of tigers; trees filled with Indian giant fruit bats; caves full of eastern horseshoe bats; leaping grey langurs; dashing Indian hares; and the cream on this richly mixed cake of wildlife sightings — views of Indian wild dog (also known as dhole), jungle cat, leopard and no fewer than six tigers.

Thursday, Dec. 28, 2006 was not just a superb day for watching wildlife in Kanha NP, it was a day seasoned with a gentle reminder about the nature of life. It is all too easy to carry one’s work-oriented goals on vacation, too, and to set one’s own targets of thrills and sightings. And what could come higher than the goal of seeing tiger?

But to set out with such a goal not only involves the risk of disappointment should your search fail, but it may also blind you to other natural wonders that literally leap out at you.

Winter in India is perfect for me: cool, even chilly at dawn and dusk, warming nicely by mid-morning. Each morning and afternoon saw me out in the national park, and on that Thursday in question by the time the sun was rising I was already out and listening to the eager chattering of Alexandrine, rose-ringed and plum-headed parakeets zooming back and forth in noisy gangs over the forest.

Suddenly, in bushes right beside the track, I spotted a leopard. This graceful creature is not endangered like the tiger, but in some respects it is so much harder to see. How can you go out and look for a leopard? It’s a master of camouflage, and this one stalked silently away through the forest, only to reappear crossing the track a few minutes later.

Wow! That’s made the day, I thought — and I hadn’t even eaten breakfast yet. Whistling ducks and peafowl, woodpeckers and barbets, drongos, orioles and shrikes were among the bird fare that morning, and though the species total only barely climbed over 50 that day, I was glowing with the leopard sighting.

There were other mammalogical pleasures tool — angurs, swamp deer and barking deer, but despite the leopard being a “day-maker,” the afternoon was even more exciting!

That Thursday afternoon began with the thrill of the chase, as my local expert companion Tarun and I tracked the fresh pugmarks of a 2-year-old male tiger along a sandy track. Eventually, we caught up with it and basked in the glow of pleasure that every tiger-sighting brings.

After it had rested, then scented various tree boles, the young tiger slipped away between the sal trees and was gone, so we set off once more, to find whatever presented itself. In a narrow rocky ravine, thick with bamboo, we came upon India’s answer to the bison, otherwise known as gaur. They are huge, stocky yet very attractive creatures that live in family groups in thick forest, so despite their size they can be extremely difficult to see. And these were my first sightings ever!

The day was definitely on a roll, because soon after a female dhole (Indian wild dog) trotted into view, and I thought again — it can’t get better than this!

I had been in various parts of India on previous occasions, but had never before been lucky enough to encounter a dhole — making it two new mammals for me that day. Despite the birds, mammals had made an amazing showing. I could have seen any one of them and gone back to camp satisfied, but it was another, completely unexpected event that stole the wildlife show for me.

Passing through one section of forest, there was a sudden flurry of movement as butterflies burst into motion. I had seen plenty during the day, but this was something quite different; it was a veritable cloud of butterflies. This particular species goes by the uninspiring name of common crow, but its actions were truly inspiring.

The butterflies were ascending in a swirling column into the dappled sunlight, like smoke rising from a leafy fire. As I rapidly scanned around, I found the nearby tree branches were drooping under the weight of butterflies, clustering in their thousands. Even more were roosting, it seemed, than had taken wing. It was as if an autumnal tree that was ready to shed its leaves suddenly cast them upward into the light, instead of letting them fall to the forest floor.

As rays of light filtered down through the tree branches, butterflies were everywhere, spiraling dizzily into a scene of pure magic.

It was a marvelous day, Dec. 28, 2006, rich in birdlife and mammals, but in my memory it was the unexpected insects that took first place. Despite the leopard, the tiger, the dhole and the gaur, I will remember that Thursday as the day of the amazing butterflies.