A perilous flight path of life and death 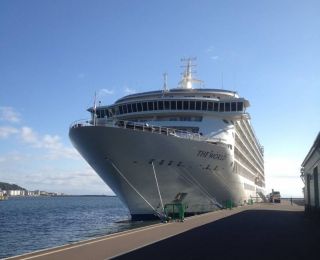 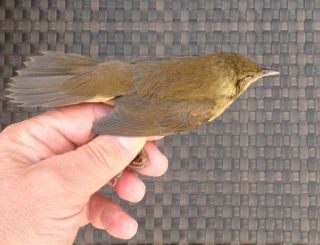 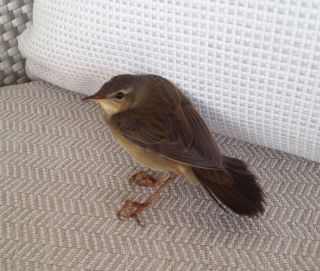 As I emerged into the pre-dawn darkness of Sept. 13, I was greeted by a brief flicker of movement. I wandered along one of the upper decks of The World, past the gently slopping pool with its ring of still-vacant sun loungers. I peered at the surprisingly real potted bushes, staring at their dense green foliage in the hope of finding life among them; instead I found it scurrying across the decking and under a chair!

As the creature emerged again on the chair’s far side it appeared mouse-like despite it being a bird. Instead of hopping, it ran for further cover in a crouching pose. It was a Middendorff’s warbler.

With large feet and strong toes, the warbler seemed as at home scurrying on the decking of this ship as it would on bare ground among tall, rank grasses and bushes in its more natural surroundings in the Russian Far East.

I had last seen the species, named for the 19th-century German-Russian naturalist Alexander von Middendorff, just two days earlier on the remote Kuril island of Yankicha. There, while I was scrambling up the very steep grass- and herb-covered flanks of this astonishingly beautiful volcanic caldera, I had flushed literally dozens of Middendorff’s warblers from the vegetation ahead of me. While some had perhaps bred locally, I suspected that the majority were southbound migrants from further north heading down the Kuril Islands chain toward Japan. They were responding restlessly to one of the great urges that drive the pattern of the avian year: the urge to migrate. Now, here was one scurrying on the deck of the largest private yacht in the world!

On my second round, an hour later, and one level higher, I came upon my first casualty of the morning. Beside the engine stack on deck 12 lay another warbler. It was bigger, deeper brown, and with a larger bill and feet than the running Middendorff’s. It was a saddening and forlorn sight. Death on the deck.

Sadly, such endings are not uncommon events onboard ships. I bent and picked it up and was struck most by how light this remarkable creature was. The touch of its soft brown feathering brushing against my fingers was barely tangible; its weight on my palm barely registered. Beneath that exquisite feather coat lay the corpse of a marvel of avian evolution.

Its size gave it away: It was a Gray’s grasshopper warbler, named after a 19th-century British ornithologist. It is a species I know well as a summer visitor to Hokkaido, and I could imagine it in life giving its extraordinarily loud explosive song from dense cover; but here it was, its body stiffening from its inadvertent impact; flesh and bone against steel.

We were at that moment sailing south past Hokkaido’s Teuri Island bound for Otaru. I was on board The World, completing a three-week circumnavigation of the Sea of Okhotsk. That expedition had carried me clockwise round this almost enclosed Russian sea starting and ending in Otaru, and had been timed to experience late summer as it waned into autumn in the remote Russian Far East.

Our timing was such that not only had we witnessed this blurred seasonal boundary, but we had also transected one of the year’s extraordinary and inspirational events: autumn migration. Each year I thrill at witnessing this event. Tiny birds in their millions making their journeys, their migrations, are as inspiring as the annually returning Perseid or Leonid meteor showers, though not quite as silent.

A few days before I found the dead Gray’s warbler, there had been a “fall” of tiny Kamchatka leaf warblers onto the ship. On a night with a cloudy and rainy sky and poor visibility, the luminous white superstructure of the vessel must have shone like an irresistible beacon to them. The tiny eyes of these birds and their minuscule brains having interpreted the onboard lights as part of the night sky, they were drawn toward them like moths to a flame.

The living were perching on railings, furniture and cushions, reveling in a few moments of respite from ceaseless motion under their own muscular steam. Nearby, the dead were still lying where they had fallen beneath windows or glass panels after battering themselves senseless. All in all there must have been at least a dozen of them.

Delicately plumaged above in a rich green, they had a slight lemon-yellow tinge to their off-white under parts. Their subtle and delicate beauty was combined with an ethereal lightness and an elfin appearance. Each tiny avian pixie had likely been raised in the northern stone birch forests and endowed by its parents with a fully loaded genetically imprinted cornucopia.

In computing terms its “operating system” had come fully preloaded with body clock, GPS, terrestrial mapping, star-chart software and more. It may even have had geomagnetic sensing “equipment” bundled with it, too. That miraculous package contained everything it required to choose the timing of its departure, select a direction and move the necessary distance through the night sky to reach its ancestral wintering grounds in some far-off tropical forest, all without familial guidance.

I rescued several of them from where they were fluttering against glass panels, or lay stunned on the deck. Their ceaseless urge for motion had been confused by the ship’s lights and thwarted by invisible, immobile barriers. I attempted to warm them out of their stunned state by holding them in my hands, but sadly, most succumbed to their hunger and concussion. Very few survived to take flight again.

How did I know they were hungry? A gentle breath was all it took. Blowing softly at their breast feathers instantly revealed the complete absence of the rich deep brownish-yellow subcutaneous body fat that should have been evident. The dead and dying were critically low on energy reserves. For them the ship was both bane and boon. Drawn in by its alluring lights at least it offered them somewhere to perch for a while. Some were sufficiently rested by their brief stay on board to take off and continue their seasonal flight. Unfortunately, most were not.

During a week of travel along the west coast of Kamchatka, down the Kuril Islands arc, across to Sakhalin and finally down the west coast of Hokkaido, we had been within sight or sound of migrating birds day and night. Warblers, rubythroats, buntings, finches and pipits all came on board. Once there was a grey-streaked flycatcher, then one sunny morning there was suddenly a flock of at least 25 white wagtails flying around us in their characteristic bounding flight. I was distracted from them by sightings of sperm whales spouting their oddly asymmetrical and angled blows in the distance. When I ceased whale-watching and turned back to bird-watching, the wagtails had moved on, pursuing their own mysterious course.

Once, I surprised an out-of-place shorebird onboard (a grey-tailed tattler), but more out of place still was the female great spotted woodpecker that I found one morning clinging to one of the metal poles supporting the netting around the tennis court. Yes, I did say tennis court! The World’s upper decks come complete with jacuzzi, swimming pool, golf putting greens and a tennis court — and, on some mornings, birds!

Visible migration into and through the Japanese archipelago from Hokkaido to Kyushu involves not only clamoring geese and swans, bugling cranes and silent raptors, but vast numbers of tiny migrants passing overhead calling as they go, unseen or ignored by most of us. They are easily forgotten unless something grounds them where we cannot miss them.

On my first early-morning walk after arriving home I found another stunned leaf warbler. This one had collided with a high-rise condominium building, not a ship. This is the season of the massive meteor storm of millions of birds passing through our airspace dodging hazards as they go. Only some will return safely next spring, but I will be here waiting anxiously for them.