The turtle lays eggs into a chamber scooped out by its massive hind flippers. 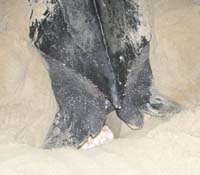 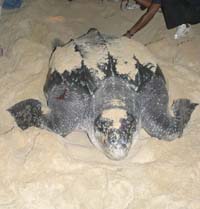 It was as dark a night as I can ever remember, and one I will never forget.

Overhead the sky was diamond-dusted with myriad stars, but their light was not enough to illuminate Matsura Beach. I was experiencing a strange sensory overload; while I struggled to see in the nearly imperceptible starlight at ground level, my ears were as filled with the rush and roll of waves on the beach — as was my nose with the salt scent of the ocean. And, though it was long after sunset, the heat made me perspire from even the gentlest exertion.

As I walked in search of a dream, I couldn’t see my feet, just feel the uneven sand, and only the crashing whiteness of the waves gave a barely traceable border to this littoral experience.

All my life I had longed to witness the primeval exertion of a marine turtle returning to land to lay its eggs. I have seen their oddly raised heads and slick carapaces at sea from various ships in various parts of the world, and I have seen their tracks on beaches in the distant Galapagos Islands in the Pacific off Chile. Then, three years ago and with my hopes high, I visited a beach on the coast of Trinidad in the West Indies, only to be disappointed by a complete absence of turtles.

But a few days ago, on returning to that same Trinidadian beach, I was filled with the emotion of finally being about to realize my dream to watch the extraordinary devotions of one of these massive mothers-to-be.

Shadow in the darkness

As I wandered along the beach, I at first almost missed the even darker shadow ahead of me in the darkness. Then, when my eyes adjusted, I realized that I could just make out enormous flippers flicking sand as a female Leatherback Turtle made a trial nest excavation. I felt elated to finally see this fabulous animal, a marine reptile now endangered throughout its entire range.

The Leatherback is an extraordinary creature, not only is it the largest living turtle (some reach 2.4 meters long, with a span across the front flippers of 2.7 meters), but it is the only one dressed up in rubber! And though it has an awesome, gothic look, with a prominently ridged, black, flexible carapace, this remarkable giant is gentle and subsists largely on a diet of jellyfish.

The first two turtles I saw that night were making only tentative visits to the beach, and after a while they retreated to the sea leaving false nest excavations and scattered tracks that were perhaps part of an instinctive confusion strategy to make the task of finding their true nests more difficult for predators.

The third Leatherback I encountered (see accompanying photos) was another matter altogether. As I approached, she had already scraped out her shallow nest in the sand with her massive fore flippers. Then she delved down, stretching deeply with her massively muscular hind limbs to haul out sand and create a narrow but deep nest pot into which, as I watched, she deposited clusters of shiny, white, golfball-size eggs. Her egg-laying exertions finally over, she paused before filling in the special chamber with sand, scraping and pressing it down repeatedly until it was invisible. Only then did she bring her fore flippers back into play, pushing sand back into the main nest scrape with those massive paddles. Seemingly content with her efforts at protection and concealment, she rested again before heading back to sea.

The nesting season usually lasts from March to August, and during that time females return five to 10 times, digging a new nest and laying another clutch of eggs on each occasion. After that, they won’t breed again for two or three years.

Two aspects of this whole process amazed me, one being that she achieved it all while facing in the opposite direction, entirely driven by instinct and feel, and second, that I watched it while surrounded by a throng of people. This seemingly remote Trinidadian beach is now a focus for ecotourism, with a very strong local interest and the whole operation overseen and managed by teams of local volunteers.

Though I prefer to experience nature in a more solitary setting, I was thrilled by the thought that every single turtle watched through the laborious process of nesting, is protected. A watched-over turtle survives, and we watchers on the beach were the best deterrents against turtle poachers and egg-thieves.

At sea, however, the turtles’ fate is another matter, because since 1982 the Pacific Ocean’s Leatherback populations have declined by 97 percent, while the Atlantic populations face similar problems, too.

These impressive sea turtles have swum the Earth’s oceans for well over 100 million years, and today they still only return to land because they are constrained by their need to breed. It may take a turtle several decades to reach reproductive maturity, and only then do the females beach themselves to lay their eggs. Over the course of a season, a female may lay as many as 100 eggs each time she returns to land, yet it is unlikely that more than a handful of hatchlings will survive to reach maturity.

It is amazing how, after eight to 10 weeks, the eggs hatch and the young turtles somehow can dig their way up to the surface. From there, how any of them survives running the gauntlet of predators or avoids turning toward bright coastal lights instead of heading down the beach to the glistening of moonlight on seawater, is another miracle.

Once abundant predators of surface oceanic waters, all seven species of sea turtle are either endangered or threatened. This is largely because of habitat loss (particularly of coral reefs and nesting beaches), pollution (floating debris and chemicals), harvesting, egg-poaching and accidental death in fishing gear. More recently, too, a fatal disease called fibropapilloma has been adding to the toll.

Given the brevity of most of their lives, and their current fate at the hands of man, it seems ironic that in Japan the turtle is symbolic of old age. In Japanese mythology, the turtle is famed for living for 10,000 years, and visitors to the Toshogu Shrine at Nikko in Tochigi Prefecture will find a statue there of a crane (considered to live 1,000 years) standing atop a turtle in a potent dual symbol of longevity.

Perhaps more famous still is the oft-repeated folk tale of Urashima Taro, a young fisherman who saved a turtle and was rewarded when the animal turned out to be the beautiful daughter of the Dragon King of the Sea. Unaware of the leisurely unfolding of time beneath the sea, Urashima then lived with his submarine bride for more than 300 years.

All mythological symbolism aside, though, turtles need our help if they are to survive at all.

Three species nest in Japan, the commonest being the Loggerhead, with lesser numbers of Green Turtles and Hawksbills. If you want to watch turtles here, then Ibaruma Beach on Ishigakijima Island in the Yaeyama Islands of Okinawa, or Hiwasa in Tokushima Prefecture on Shikoku, would be great places to start.