Amazing case: This outgrown outer form of a Cicada still clings to a tree on the slopes of Mount Yubari in Hokkaido.

A blood donor to the masses 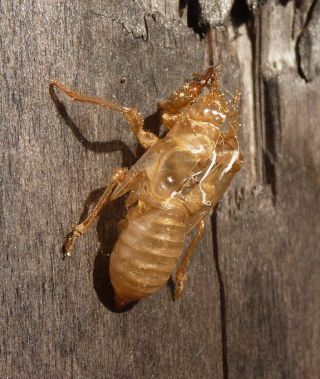 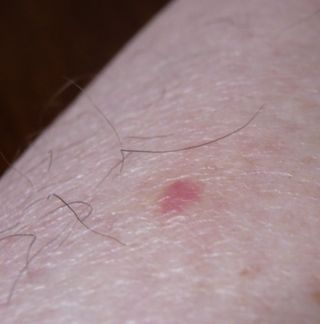 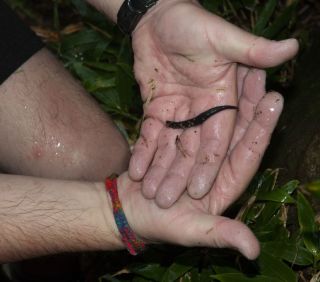 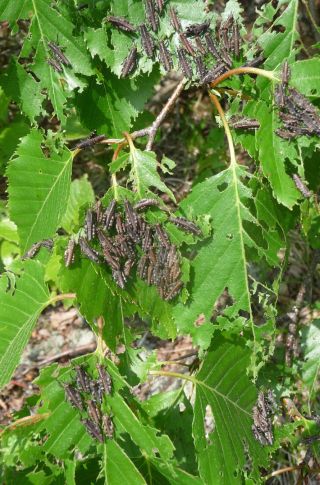 The bug days are here again. Shades of green are deepening in the debilitating heat of a summer that’s made more of a hardship this year due to the post-March 11 energy-saving efficiencies required of us.

Some creatures thrive in warmth, sunshine and summer temperatures, but I am the opposite; my engine really gets comfortably into gear when the mercury dips to single digits and preferably minus ones.

Summer’s sunshine does, however, tempt out many creatures fond of basking, so this is the season to seek out skinks, lizards and snakes curled and coiled on sunlit rocks or banks. But the fondness certain snakes seem to have for ponds and streams makes me wonder whether even they overheat at times — or could it be that the those haunts’ cooler temperatures render me a little more alert and observant so that I notice them more?

There is a time in early summer when the temperature crosses some invisible threshhold and, as if conjured from another dimension, bugs of all kinds suddenly appear.

Among the earliest I notice each year are the droning drowsy bumblebee queens fresh from hibernation. The first butterflies of the year, often peacocks, colorful with large bright eye-like spots on their hind wings, are especially conspicuous and always a welcomed pleasure — like a sunny spell after many days of gray skies and rain.

Then, day by day, more and more insects appear, until very soon they seem to be everywhere.

I sat for only an hour recently atop Mount Yubari in Hokkaido, and yet five different species of butterfly passed by me; I didn’t even attempt to count the range of beetles, flies or wasps that flew past, as they were just far too many.

When I’m hiking along mountain trails in summer, I find occasional bright-red Giant Velvet Mites slowly trundling along, while Blister Beetles and Fiddle Beetles ignore my weighty footfalls as they progress at speed. Meanwhile, passing butterflies snag at my attention, just like a fisherman casting his fly teases a lurking trout. However, these sightings come only intermittently, and erratically; yes, there are more species if I look carefully for them, but look I must.

Emerging from the forest and moving beyond the tree line, it seems only natural that with plant diversity suddenly falling by around 95 percent, insect diversity would also fall dramatically. Yet I have often noticed concentrations of bugs around mountain peaks, as if — like me — they had some aspiration to see the world spread out at their feet.

On occasions, I have found a dozen or more species in a casual investigation of the summit cairn alone, and while resting with my pack on the ground beside me I have become yet another surface on which they land. Perhaps these are bugs on the move, individuals caught up in random air currents. I certainly see no opportunity for them to feed, and the occasional buzzing cicada in such lofty zones is out of place both physically and behaviorally.

These summit-crowning creatures are not bothersome, they neither bite nor sting; they seem otherwise occupied, as if waiting for something. In an imaginary world, this could be their cosmic frontier — a place from where they slip between dimensions.

As a naturalist of some experience, thanks both to my many geographical opportunities and my chronological advantage, I pride myself in having a healthy interest in everything living. I have realized, though, that I do have my limits. Returning from a mountain foray some weeks ago, with the skin of my arms and legs blotched by more than 50 bites — all of them from a single species of Simulium, a Blackfly — I couldn’t help contemplating how much more pleasant life could be without them!

Great droning horseflies land silently and bite into my blood with jaws seemingly as strong as a dog’s — raising on me huge welts that itch like crazy and last for days.

Buzzing mosquitoes give ample warning of their impending hypodermic attack, but the pitch of their whine can create almost ceaseless pre-jab stress — much like visiting a nurse for a shot, only to have her keep harping on about how “It might hurt a bit.” I feel like shouting (to nurses and mosquitoes alike) “get on with it, put me out of the agony of anticipation!” The itch of a mosquito jab can raise a painful red skin patch, but thankfully it usually fades in a day or so.

However, visits to the Canadian and Russian Arctic have taught me just how variable we humans are in our responses to the blood-sucking attentions of insects.

I have lathered myself in Deet insect repellant, the most powerful one I know of — though I worry about how toxic it is, given that a finger coated in it will leave its print in plastic — and still I have been more heavily drilled than a major oilfield. That, while right next to me a local stands unperturbed and seemingly without itching reactions to the swarms of mosquitoes descending on us both.

North of Nome in Alaska, in the face of overwhelming swarms of Lilliputian attackers, I was once forced to retreat from a tundra hillside where I was eagerly seeking the rare Bristle-thighed Curlew. The beasts sought me out by heat, swarmed around me like an enormous dense flock of deranged starlings, their sound driving me to distraction, and accessed my flesh via gaps in my clothing I didn’t even know about. They even set up their drilling rigs on my eyelids and in my ears; they were quite unperturbed by copious applications of repellant and seemed to regard my clothing merely as a challenge, not a barrier, to their probosci.

Blackfly are another torture altogether. They are silent, demonically black, and deadly in pursuit of their target — me!

When I add Deet to whatever attractive chemicals my skin, sweat and blood give off, it seems only to confirm for them that here is a fine “restaurant” not to be ignored; one with fare so appetizing that they should abandon all other targets and home in on me.

Blackfly bites are distinctly different from those of mosquitoes. At first they itch, but only a little annoyingly and only for a while, but then they raise a small blood spot and a bruise. However, the true torture begins hours later when settling down to sleep. That is when they begin to itch in earnest. Seemingly, the warmer the surroundings (such as when the bitee is in the bath or under a warm futon), the more they itch — and the itching sometimes lasts for several days.

Millions of people have bird tables in their gardens or on their balconies, and think nothing of feeding those avians that visit. Some people feed wild mammals; but very few feed insects — though that is what I have come to realize I do.

Each time I venture out during the bug days of summer, I consider how many milliliters of blood I’ll be donating to the forest. Yet though I am a regular blood donor to the world’s insects, it is to leeches that I have imparted most of my life’s essence.

The last big feed that leeches had from me was in the tropical forest reserve of Sinharaja, in the mountains of southern Sri Lanka. There is something bizarrely sinister about the way those creatures pause in their perambulation across the forest floor, raise themselves vertically to their full height and wave their heads around seeking the source of heat — and food.

Their entire manner has shades of some vampire world about it; their movements seem to cry out for a synchronized, sinister musical score. Leeches cut an incision with precision, one so expertly rasped that it doesn’t hurt at all. Indeed, so painless are their attentions that the first indication of having been leeched is often of feeling something fall off — or of noticing a dampness in one’s socks.

It is only then that the gruesomeness of the situation becomes clear.

The first time it happened to me was after a day spent in a Malaysian rain forest. When I returned to the camp, I noticed several damp and bloody patches in my socks, and found one culprit still in place. Pain-free at first, the itching sets in much later, but only rarely lasts as long as the itching caused by my ultimate bugbear — the tick.

Unlike leeches, ticks not only take blood from their hosts, but they return the favor with unpleasant side effects: A tick bite I received one October in Argentina finally stopped itching the following June! And their bites have the potential of disease transference, too.