Snow story: A red fox trail leads across an open meadow in the direction of the Akan volcanoes in eastern Hokkaido. To a purist wildlife spotter this would count as nothing because I did not see the animal. To me, though, it told a fascinating tale of the animal barely wavering in its direction as it patrolled its range, not stopping for food.

'Tigers' and naturalists of many stripes 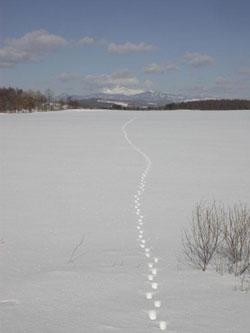 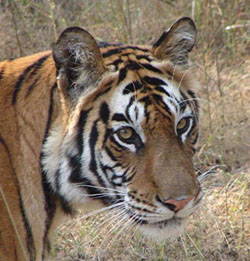 One person's species sighting may be no such thing in the eye of another beholder.

I enter the forest and soon the rhythmic swish-swish of my skis over the snow mesmerizes me. This is my first foray of the new year in Hokkaido, making tracks in the lowland forest of Nopporo close to home just east of Sapporo.

As the rhythm of my arms, my legs and my skis builds, the pace of my thoughts changes too. The pressure of things “I must do” begins to fade, and unbidden ideas wander through my mind as if wafted on the breeze, or snagged briefly on the branches overarching the frosted and snowy views I contemplate.

I admire the meandering pattern of paw prints made by a browsing mountain hare, and glimpse a black woodpecker as it flits silently from tree to tree; I listen and watch as a dark, unfrozen streamlet trickles between snowy banks and reflects the stark, denuded and gray-barked trees above.

Naturalists wear many stripes; while some wander quietly, others quest passionately. Whereas some glow with contentment at each and every unexpected encounter — whether of dragonfly, deer or falcon — others are like homing missiles seeking out specific targets to add to their lifetime lists of sightings — whether a new species of butterfly, bird or mammal.

Some of us return again and again to favorite walks, favorite woods or hills, and savor and extol the virtues of renewed experiences in familiar places and with familiar species, extending all the while our knowledge of these “old friends.” Others prefer to move ever on, visiting new sites in order to log new sightings. Whatever their inclination, however, most naturalists make notes about their experiences, and I have been doing so now for more than 40 years; accumulating information, looking for patterns, always learning.

New experiences motivate many of us, and it is through our notes and our lists that we strive somehow to abbreviate those experiences, to make a shorthand mental list of them. But if we make lists, what actually are we listing?

If I glimpse a flash of fur in the forest at dusk, does that “count” as my first flying squirrel of the year? If I peruse a fox’s tracks across open fields to work out which way it was going, does that count at all? If I watch entranced for hours, and spring after spring, as red-crowned cranes in eastern Hokkaido perform their balletic nuptial dances, does that really only “count” as one sighting (albeit repeated) on my list of bird species seen?

Clearly lists are, of themselves, heartless, consisting merely of cold numbers recording sightings, and reflecting neither whether the subject was rare or common, whether it was seen well or poorly, merely glimpsed or observed with time to stare.

The flashing, black-and-white barred wings of a hoopoe are unmistakeable, but the very briefest of glimpses I had between trees of this gorgeous bird one day long ago in Norfolk, eastern England, was hardly the kind of view I had dreamed of as my very first sighting in Britain. For sure I saw it — but was it satisfying? No. So how should one list it?

One great friend adds a cryptic acronym, “bvd,” after recording such brief sightings in his notes: “better views desired.” Yes, he saw it and will remember the pleasure of doing so, but the dream of an even better sighting lingers.

Others are more demanding, they append “bvr” — “better views required” — as if they were somehow personally let down by a poor experience. Some seem to feel disappointment regardless of their sightings unless they have captured a stunning photograph of their target species. There is no doubt that if you set your sights that high, there is every opportunity for disappointment to strike you very deeply.

To a purist, for instance, the hare tracks I admired in the snow would count as nothing, because I did not see the animal itself. Yet for me, those tracks told a story of a secretive, nocturnal creature seeking food following a recent fresh fall of snow.

Conversely, my brief view of the black woodpecker, locally a much scarcer species than the hare, would count significantly for the purist. I saw it, after all — even though I found the hare tracks far more satisfying. Perversely, had I heard the woodpecker without seeing it, and known about its presence from its ringing cry, and perhaps from the tapping sounds of its beak on dry wood, my experience would have felt more complete; I could have imagined so much more.

Avery recent prolonged spell of time I spent in India has given me considerable food for thought on the nature of wildlife sightings. Despite the tremendous biodiversity of that country, so often the near-singular target of naturalists visiting the subcontinent is the tiger. Now a great rarity, and under tremendous pressure from poachers for its whiskers, skin and bones, the Bengal tiger is increasingly difficult to see, even where it is protected in national parks and tiger reserves.

Certainly, no foray into an Indian forest comes with any guarantee of a sighting, yet there are often signs all around of the presence of the tiger for those willing to look for them — and they tell a fascinating story of an ecosystem with a powerful predator at its apex.

My opportunities to be where tigers live, both recently and before, have led me to reflect deeply on how to “list” or “rank” one’s connections with wildlife, not merely as a check on a list, but as an indication of the strength of that connection.

I call what I have now devised as a result “My Tiger Sighting Scale,” though it is not just for tigers. The tiger is merely a metaphor that applies equally to any quest, and it works as well for Japanese macaques, mountain hares, giant salamander, red-bellied frogs or Okinawa rails — and anything else you dream of encountering or experiencing.

Here is what I came up with — a six-point scale combining experiences and emotional responses: 0: Nothing! Truly no sign of my “tiger” at all, yet I know it’s there.

An experience filled with dreams and imaginings. 1: Signs. Seeing footprints, tracks, scratch marks, droppings or other indications that my “tiger” has been here.

Imagination runs riot, telling stories about the creature’s recent activities. Excitement builds — I am close! 2: A View. There it is! I glimpsed my “tiger,” partly hidden in dense vegetation; not a complete view.

Elation is tempered by the desire for more. 3: Good View. Great! I can see my “tiger.” There it is, a clear sighting, albeit brief, but in my mind I can store an image.

Excitement lingers, seasoned with a desire for a photograph. 4: Very Good View. Fantastic! A prolonged opportunity to stare, to study my “tiger,” and at close range.

Thrilling experience, with long-lasting excitement and a wealth of images in the mind and in the camera. 5: Excellent View. Wow! Hard to imagine beating such a prolonged, close-range experience, watching the fascinating behavior of my “tiger” and taking wonderful photographs.

Each new year begins filled with dreams. May this Year of the Tiger fulfil your dreams — and bring you an appreciation of the very many signs of the natural world around you. I hope that you will find your very own “tiger,” too.